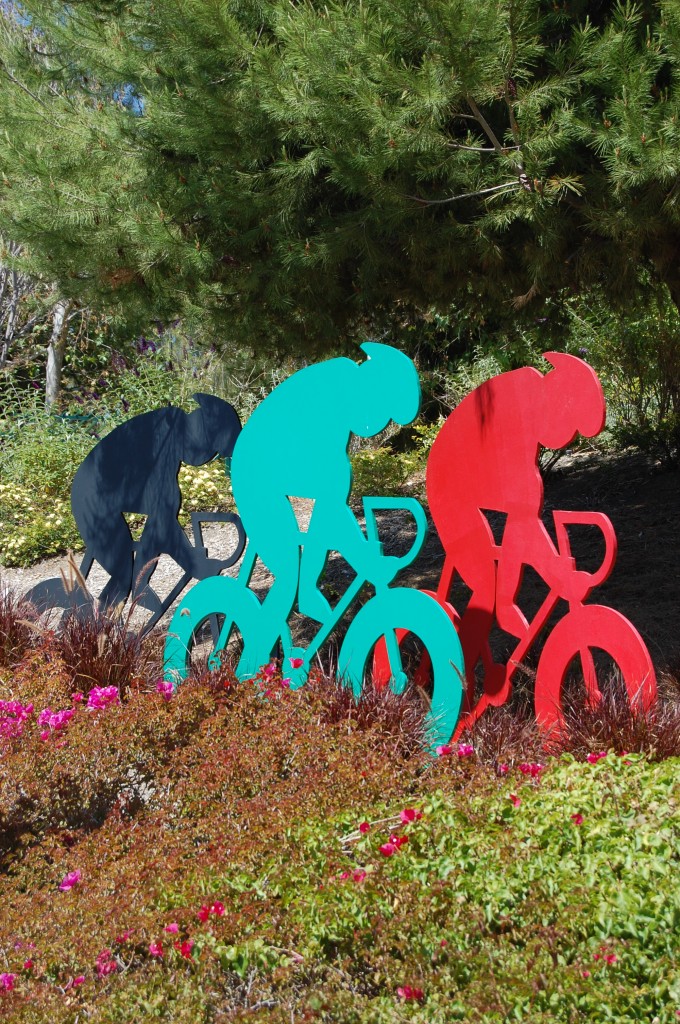 Location: Mission Viejo: 22760 Olympiad Road, near the corner of Alicia Parkway and Olympiad
Hours: 7 a.m. to 11 p.m. daily
Cost: Free
For ages: All

This 17-acre park, dedicated in 1990, has a storied history: It was built at the finishing mark of the Olympics cycling event that took place there in 1984 (which included, by the way, the very first women road-race cycling in Olympic history). The site commemorates where Olympians pumped through the hilly terrain of suburban Mission Viejo and brought international attention to O.C.’s quiet streets, broadcasting across the globe to more than 2 billion viewers.

The park was dedicated both to celebrate the event (you can show your kids where seven metal sculptures, “riding” through the plants near the corner of Olympiad and Alicia, signify where the cyclists came down the hill toward the finish line) as well as honor local Olympians, including Mission Viejo resident Florence Griffith Joyner, who won a silver for the 200 meter race in 1984, and took home two golds in 1988 before making her home in Mission Viejo. She passed away in 1989, and the park (finished shortly afterward) was named in her honor. 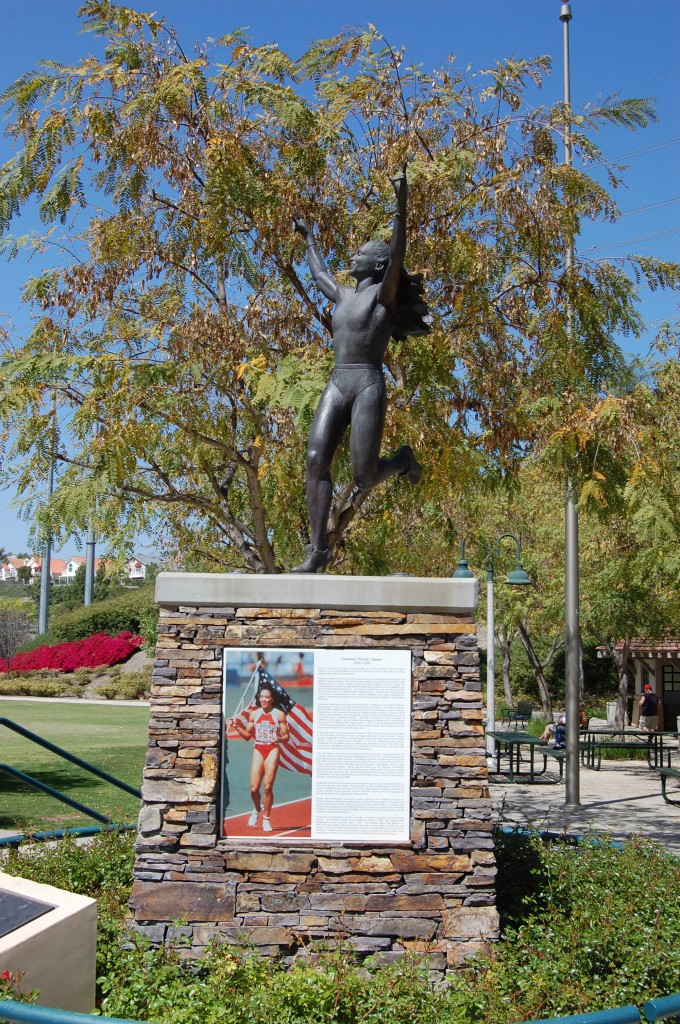 The sprawling acreage of greenery and enormous climbing structures now provide plenty of fun for kids. A small botanical garden, Olympic-themed artwork, and walk-through signs provide an almost museum-like introduction to Joyner and other Orange County Olympians. (Turns out, Mission Viejo turns out the most Olympians in the county: MV’s Nadadores swim program has produced multiple Olympic swimmers and divers, including Greg Lougainis.) You can read all the signs with your kids as you stroll along the sidewalk and fill them in on a little Olympian lore. 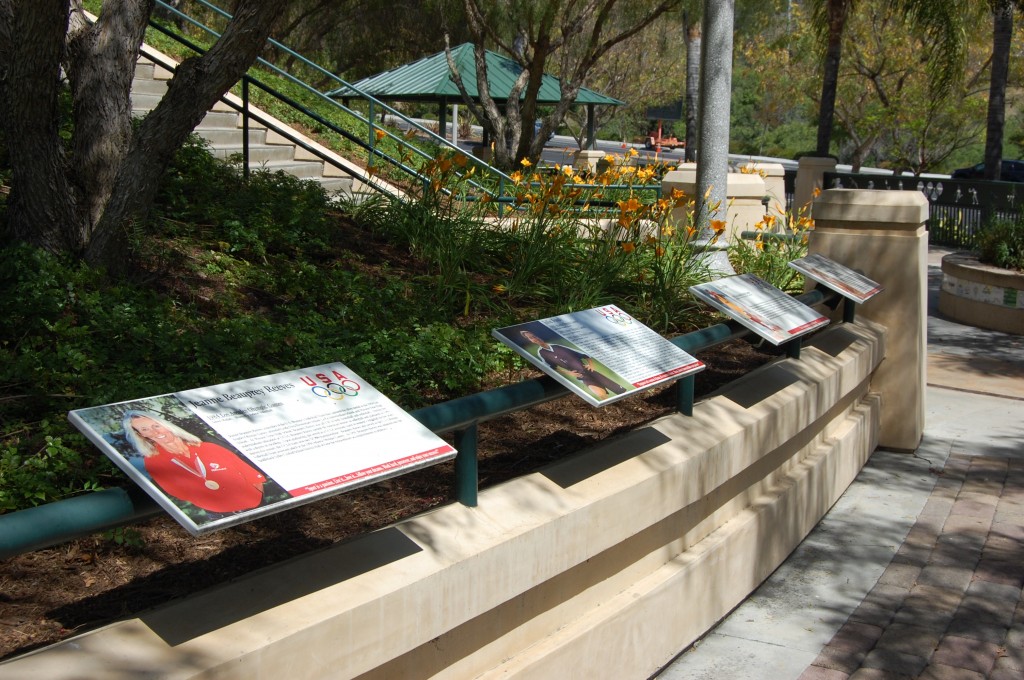 Signs detailing all of Orange County's Olympians line a walkway at the south end of the park, near the corner of Olympiad and Alicia Parkway.

If you like to start your day with a picnic, there’s a fabulously large grassy area right off the parking lot (great for Frisbee!), or you can bring your picnic basket to one of 25 picnic tables grouped under a shady arbor near the entrance (and near drinking fountains and restrooms). 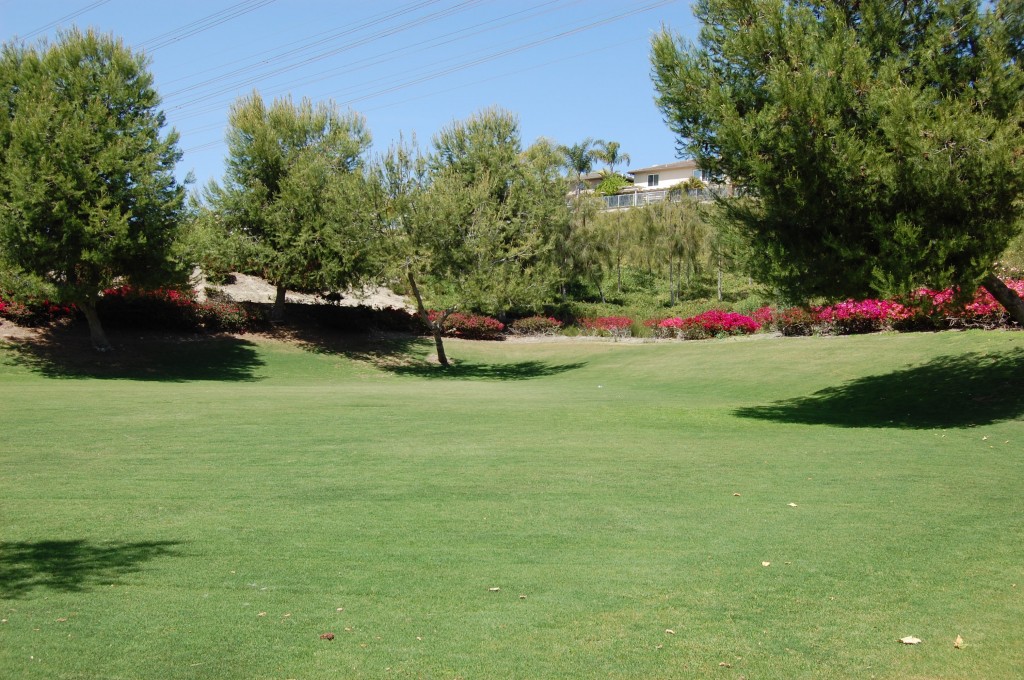 After lunch, make a point of taking your kids to that far-south end of the park, where the Olympic signs are. To get there, you’ll wander through the Olympic Gardens and gallop over a wooden bridge that takes you through five garden settings, including a rose garden (with, of course, the “Olympiad” rose) and an aromatic herb garden. There’s a beautiful brick courtyard with a fountain, and a bronze sundial and park furniture will invite you to sit down and relax a while. 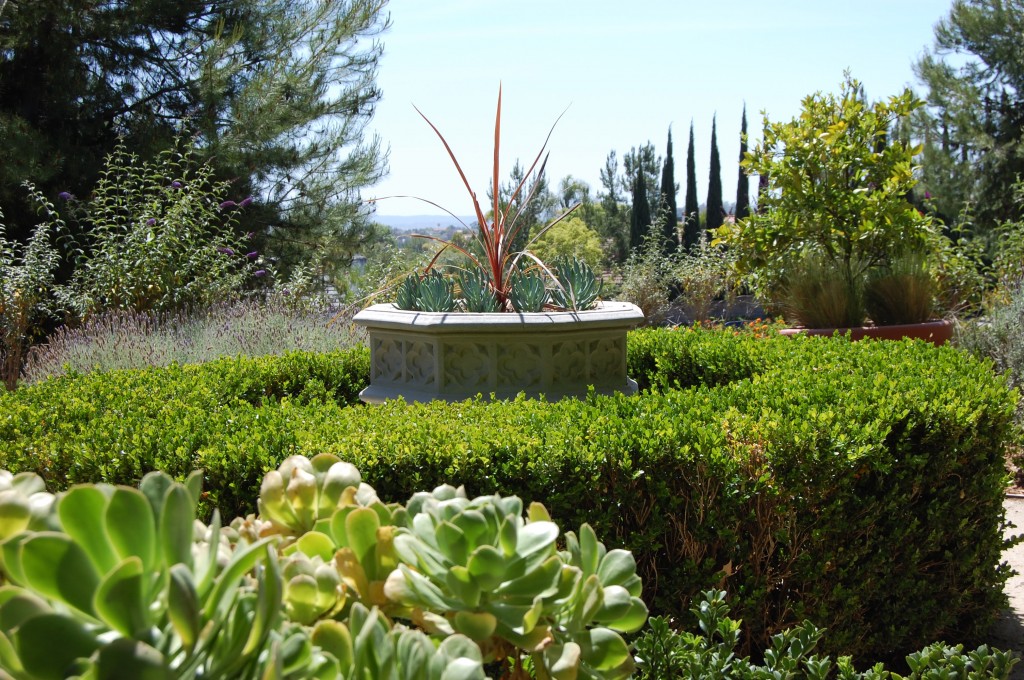 After the botanical walk, the kids will be eager to get back to the playground to try out the “huge slide” (as my kids always called it) that captures their imagination. The playground has two age-appropriate play areas (one for ages 2 to 5, one for ages 5 to 12) with some unusually creative play equipment like the “rock climbing wall” (for 5-year-olds), a “fossil cave,” a unique stepping bridge, a four-laned slide for “slide races,” a spiral slide, and (in the 2-year-old area) a playhouse with fun hand-eye-coordination toys. The park is in a pretty setting – with playful paths, plenty of greenery and rock outcroppings all around – so moms will enjoy the scenery, too. Not much shade in the play area, though, so bring a hat and sunscreen if you’ll be pushing a youngster on the swings for awhile. 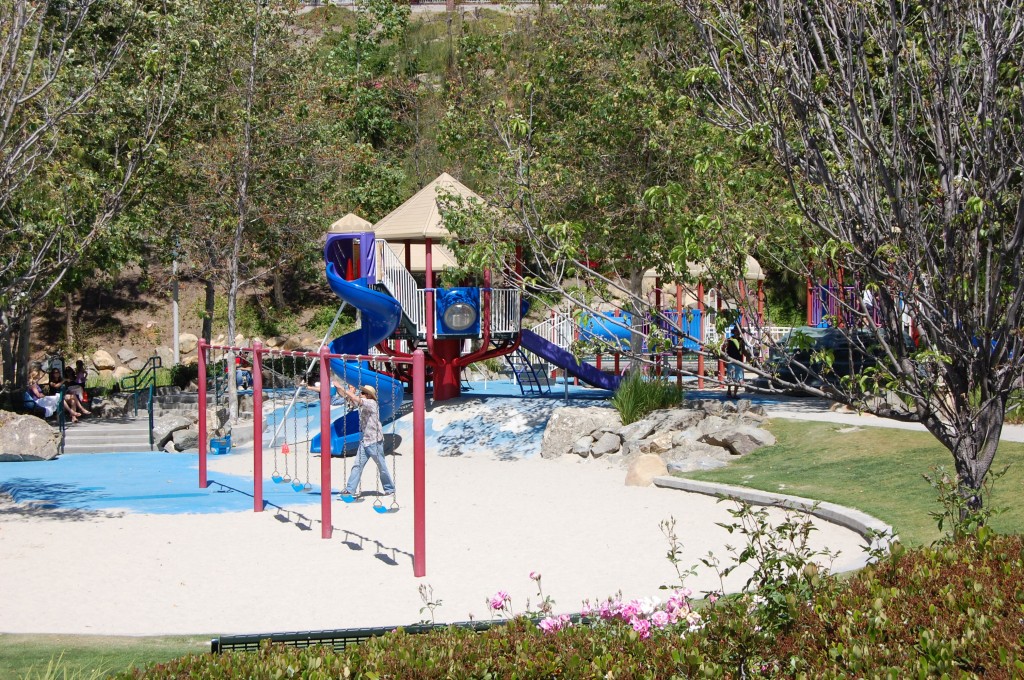 On the far northern side of the park are fields for baseball and soccer, so your older kids can bring their sports equipment.

The numerous tables are near the play equipment and make group gatherings a breeze. The restrooms are there, too.

This park received the Award of Excellence in 2000 from the California Park and Recreation Society for being the best-designed new park facility in the state.

Where to park: Parking is plentiful in the free lot off Olympiad Road

What to bring: Sunscreen, sand toys, picnic if you wish. Older kids can bring Frisbees or sports equipment for the large grassy area in the north part of the park.

Best time to go: Any time

Do you enjoy going to Olympiad Park? What’s your favorite part?